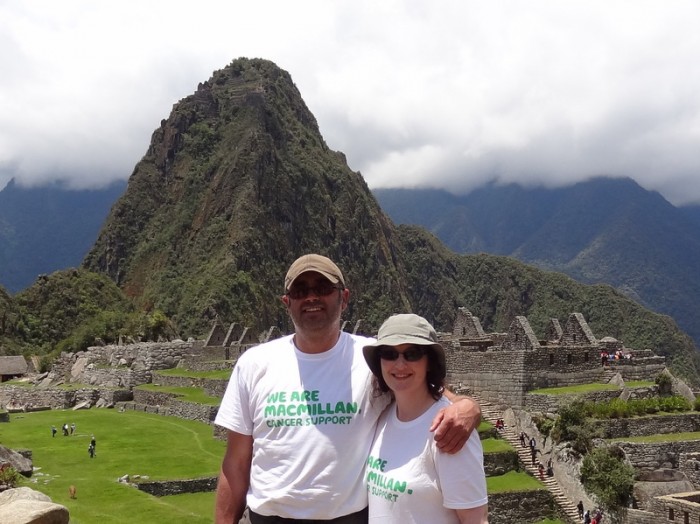 Each year that’s passed we’d thought…”This year we would do something different… have an adventure rather than the usual two weeks in the sun.” We are over 40 and so decided it was now time for us to see the world. We had thought about it in January 2013 and concluded that this was the year we would finally commit ourselves to doing something different. We did our research, made our list, and decided that Machu Picchu was a good place to start our challenge. Then we contacted the organisers, paid our deposits and set up a Just Giving page for our chosen charity, Macmillan Cancer Support. We had over 10 months of training to get ourselves fitter and equipped with what we needed. Nikwax helped us make sure everything we had stayed water tight and in its best condition during the months leading up to and including the trek. It was great to get out over the South Downs nearly every weekend and experience everything the English summer could throw at us, putting their products to the test. With a weekend climbing Snowdon in August, we felt we had done all we could.

At 2am on the 2 November 2013 and we were ready to leave for Heathrow. All packed, we set off for what would be a trip of cars, planes and coach transfers, to Madrid then to Lima and finally to Cusco in Peru arriving on Sunday afternoon.

Monday morning started with an acclimatization trek to help us settle in, with a coach ride to the top of Cusco, a place called Tambomachay. This was 3765m above sea level. We walked round farmland, through rocky valleys and saw the next Inca site where we’d be stopping for lunch, Saqsaywaman (it can be pronounced as it looks…sexy woman). The ruins here were very impressive. Rocks were stacked on top of one another to form very tight fittings with no mortar joints. All cut to fit exactly with the next one and some weighing over 300 tonnes. After a short rest we headed back in the direction of Cusco, over the hill tops and down towards the centre. It was a great start.

Tuesday morning we headed out along the SacredValley by two buses and headed to Ollantaytambo. The fields of corn and potatoes adding splashes of green as we zigzagged over the train lines and very rough roads leading to Km82.This was the starting point of the main trek and where everyone who walks the Inca trail, begins. We queued up, had our passports stamped, collected our tickets and had the obligatory group photo.

The initial trek was quite an easy start, following the river, but as we got further into the valley the inclines got steeper. As we travelled further along the route there were more Inca ruins and at each stop the guides explained what the buildings or areas may have been used for. The weather was ok and even though there was heavy rain, nothing could dampen our spirits as the views were breathtaking. After stopping for lunch, we had a steady climb along ridges and hill tops to our first camp at Wayllabamba (3000m). By this time we were grateful of the incredible job the porters had done of racing ahead, to prepare our tents and make fresh popcorn, cookies and hot chocolate for us.

It was an early start with a 4.30am coca tea. Following breakfast we filled our water containers for the trek ahead. Everyone needed to drink as much as possible along the way as there would be no chances to fill up again until lunch. We stood taking in the view of MountVeronica which stands at 5000m high. Today was going to be hard, we were going to go up….and up…to Dead Woman’s Pass….to 4215m… the flowing undulating pathway made its way through valleys and up and up into the hills above. But the paths themselves were often quite roughly made with very uneven steps giving our knees a hard work out.

This was going to be a long day…12 hours of walking and going from 3000m to 4215m….altitude would certainly takes its toll and affect us in differing degrees. The pathways meandered back and forth but we headed on, stopping for lunch with incredible views, then it was off for the big push to the top….which would still take another 2 or 3 hours.

As the weather was closing in, we all knew we had to carry on as we also had to descend back down, and it was only a few hours before we caught up with the others at our next camp. The trip down was quite precarious as the cobbled stony steps were very uneven and were covered in water, and sometimes foliage. Descending was so much harder on the knees and legs descending than. We made it back down to 3500m to our tents at Pacamayo where we had all gathered for our meal.

Again the call was at 4.30am to the sound of the coca tea delivery and breakfast soon followed. Today was fresh pancakes with bananas, peaches, porridge and toast.

It was soon time to set off…after filling water containers again, we took off round the side of the mountains to the ruins of Runkurakay, which were perched overlooking our previous nights camp. This was followed by another ascent to 4000m and the steps, again, were uneven and quite steep, but by now the weather had picked up and was quite warm and sunny. We passed over the top and then down to the ruins of Sayacmarca, then onwards with another hours trek to our lunch stop. We gradually climbed back up out of the rainforest passing through tunnels and caves, welcoming showers of water cascading over rocks to cool us on our way to our third pass over the top today. The view was spectacular and after a quick snack break, we were on our way down…again….to the Inca ruins of Puyupatamarca at 3200m. We trekked 2640m passing over landslides, shear drops, caves, tunnels and more steps than you could imagine, to our camp at Winay Wayne. Today, we got to see orchids, Humming Birds and hear the sound of Toucans as they returned to their roosts….sublime! After another 12 hour trek it was now time to catch our breath…and rest up for our big day tomorrow.

There was no coca tea call today… the porters had to pack everything away and head back from the trail. For us however, the 3.30am alarm call meant we had to get up, have breakfast and fill our packs with water, to set off as early as possible to the Sun Gate with the prospect of seeing the sun rise over Machu Picchu. We headed out on the trail winding upwards again and into the clouds….we were then following the undulating path to the Gringo Killer steps….50 or 60 steps which were really…really steep!

We weren’t far from the Sun Gate now and after a short trek along some nice paths we arrived…to be greeted by clouds. We waited for an hour or so for the cloud to lift with no joy and then ventured down the pathway, eventually, after about 20 minutes or so we saw Machu Picchu. It really was amazing…awesome…all the things you think it will be and more.

It was quite surreal arriving at Machu Picchu via the backdoor. We could see the place was quickly filling up with other tourists so we quickly took our chance for the last group photos.

So, what can we say about Machu Picchu? Of course its incredible, mystical, amazing and everything you think it will be, the views were spectacular. It seemed bigger than we had imagined and our main guide explained in great detail each part of the sacred site. Having made so much effort to get there, it felt awesome to be standing somewhere which we had only read about in books or seen on the internet.

After about 3 hours exploring the site we made our way back down to the entrance and onto a bus which took us back to Aguas Calientes. The train journey back to Cusco was incredibly scenic and eventually we were back in our hotel room for a welcome shower and good nights sleep.

Our journey along the Inca Trail was amazing; the people of Peru were great and the guides and porters were incredible. We would like to thank our friends at Nikwax for their support during our training and the trek – the products are amazing and kept us dry and fresh throughout the trip. We hope to invest in some Páramo garments next time and put them to the test.

Last but not least, on behalf of Macmillan Cancer Support thank you to all those who donated to our just giving page where 100% of the monies given will go to direct to the charity.

Next on the agenda? Could be Guatemala or there are rumours of Nepal! But first, time to explore more of what is on our doorstep in the UK before we decide.

If you would like to support us and Macmillan please visit http://www.justgiving.com/mikeandsamhibbit

And you can read our blog or watch our YouTube video at http://mikesamandmachupicchu.wordpress.com/

Inspired to take up a challenge for charity?

Are you thinking of taking on your very own challenge this year? If so, here are a few suggestions to inspire you to get started!