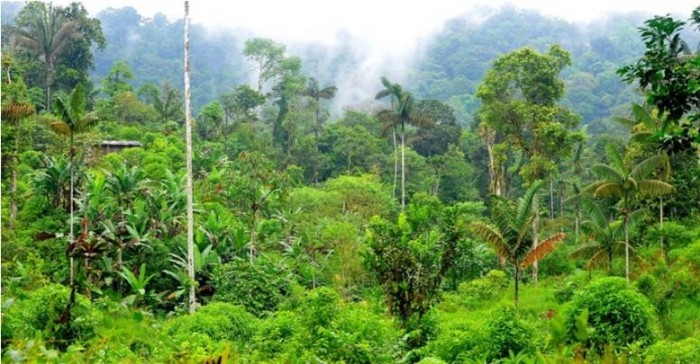 Nikwax believes everyone has a responsibility to do what they can to protect what is left of the natural world. And that’s why it puts money aside to help the World Land Trust (WLT) fund the purchase and protection of critically threatened habitats across the world.

Over the past six years Nikwax has offset its unavoidable carbon emissions, plus those from ten years previously, through WLT’s Carbon Balanced projects. In order to balance these emissions it is necessary to calculate emissions caused by running the business generated from electrical and heating oil usage, plus company transport. These calculations convert the energy values into tonnes of carbon dioxide produced.

Nikwax has contributed in the region of £50,000 to Carbon Balanced projects and has supported several project sites.

Carbon Balanced projects supported by Nikwax include Rio Canandé Reserve created by WLT partner, Fundacion Jocotoco. Río Canandé is a lowland rainforest reserve in the north west of Ecuador, which protects an endemic rich habitat, the Choco. This habitat is now highly fragmented by intensive agriculture (such as oil palm plantations) and timber extraction. Very little is under protection, and the Canandé reserve is located close to what remains of the southern boundary.

The reserve was considered a priority to project as it has exceptional biodiversity and many endangered and endemic species including the Jaguar, Howler,  Baird’s Tapir, Spider Monkey and Capuchin Monkey. A large variety of frog and reptile species are also found on the reserve. There are about 30 near threatened or restricted range species of birds at Río Canandé, and the following globally threatened bird species: Plumbeous Forest-falcon (Micrastur plumbeus), Great-green Macaw (Ara ambiguus), Ochraceous Attila (Attila torridus), Long-wattled Umbrellabird (Cephalopterus penduliger), Scarlet-breasted Dacnis (Dacnis berlepschi) and Grey-backed Hawk (Leucopternis occidentalis).

As well as a donation to cover its carbon footprint, Nikwax makes a matching donation for land purchase projects through WLT’s Action Fund. Nikwax’s donation to WLT’s Action Fund enables WLT to direct its support to any one of the charities most urgent projects. So far, funds have helped to secure land in Ecuador, Borneo, Paraguay and Kenya. Additionally, Nikwax Skitostop donations were directed to land purchase as part of ‘Buy an Acre in Colombia’.

One of the projects supported by Nikwax has been to save the habitat of Orang-utans and other threatened wildlife in forests adjacent to the fragmented Lower Kinabatangan Wildlife Sanctuary in Sabah, Malaysian Borneo. This region was chosen as a priority as 10 per cent of Sabah’s Orang-utans survive here and the forests are being relentlessly cleared and turned into oil palm plantations.

By purchasing pockets of land between existing sanctuaries there is a real opportunity to save sustainable areas for Orang-utans to live safely and breed. The forest corridors will also help protect other endangered species including the Bornean Pygmy Elephant, Malayan Sun Bear, Clouded Leopard, Proboscis Monkey and eight other species of primates. As well as birds including the Storm’s Stork, and eight hornbill species. www.worldlandtrust.org/projects/malaysia.htm

WLT was established in 1989 to save critically threatened tropical forest in Belize and has since been instrumental in the purchase and protection of 500,000 acres of wilderness habitats. It is a registered charity: 1001291 and its patrons are Sir David Attenborough and David Gower. WLT works through overseas project partners with whom they have a very close working relationship; the land is managed as strictly protected nature reserve.

In 2013 WLT is working on its Buy an Acre projects, saving critical habitats in Colombia, Ecuador, Mexico and Bolivia, and its Special Appeals, that are helping save critical corridor habitats for Orang-utans and Pygmy elephants in Borneo, Caucasian Leopard and Bezoar in Armenia. WLT also has a Plant a Tree programme to restore areas in and adjacent to reserves where forests were logged in the past, and donations to Keepers of the Wild are used to fund reserve rangers that protect the reserves which have been created.

WLT has just launched its Borneo Rainforest Appeal: aiming to raise £1 million to save vital parcels of land. Between 2 and 16 October 2013 all funds to the appeal will be matched.

Hannah and the Seaside Donkey