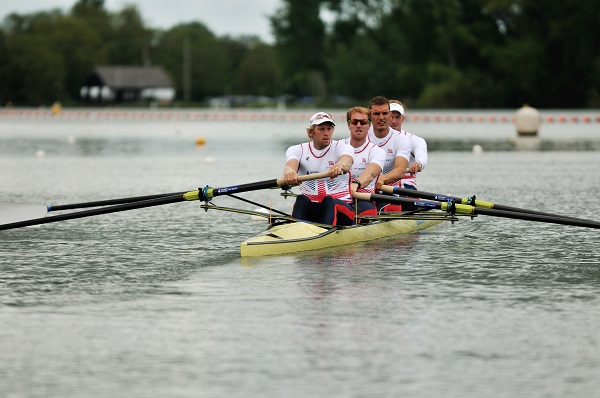 Rowing is synonymous with British sporting success over the past 30 years, since Sir Steve Redgrave, Sir Matt Pinsent and others became Olympic legends. A gold medal at the summer Olympics has pretty much been a guarantee on the boating lake since 1988.

And now, in 2014, the new generation of oarsmen and oarswomen are taking on the mantle left by those greats by winning medals and storming the water.

Nikwax caught up with one of the GB Rowing Team’s more recent heroes, Andrew Triggs Hodge – winner of gold medals at the last two Olympic Games – to talk about the appeal of the sport and how important the correct kit is to him.

“(You) are out in the fresh air, it’s an outdoor sport, but also the team element – you’re relying on people around you 100%. It’s a cross between a dedicated individual sport where each person has to excel, but in a team atmosphere where ultimately you are as strong as your weakest link.”

Nikwax opted to get involved in the sport by becoming one of the suppliers to the GB Rowing Team as they look to build towards what is hoped to be a hugely successful Olympic Games in Rio in 2016.

It’s new ground for Nikwax, having previously not been involved in high level sport, but the benefits of the products provided by Nikwax go hand-in-hand with a sport that has the demands of rowing.

Nikwax products are famous for providing high performance waterproofing, something that serves all the team members of GB Rowing Team when they hit the water for training or on race day. All the rowers’ training gear and technical underwear will be treated meaning that however hard they are working, their kit will perform.

Triggs Hodge says that it is imperative that his kit works for him. “We need our kit to stay strong with us. We train three session days, we go through a lot of hard work, a lot of sweat goes through our kit, it has to stand up to a lot. But it also has to protect us outside. We will train through the winter, come wind, rain or snow. It has to work equally hard with us.”

So what do Nikwax products offer to help Triggs Hodge and his team out? “Nikwax is great for our waterproofing” he says. “It’s very important our waterproof kit stays breathable, otherwise the sweat accumulates inside and can make you very cold. Comfort wise it’s very important so we use it to maintain breathability, but to be able to repel any rain.”

Using Nikwax BaseFresh revitalises the wicking properties of base layers and improves cooling efficiency, meaning items can be worn again and again. “When we’re in the gym and you do a 16K ergo, I’ll sweat out a litre and a half or two litres depending on how warm it is, so that adds a lot of other stresses, so using products like BaseFresh keep the clothes fresh, keeps you wanting to wear it again – otherwise you end up going through a lot of kit! Nikwax does a great job of ensuring our kit’s in good working order.”

Nikwax takes huge pride in being environmentally friendly and PFC free, something that Triggs Hodge appreciates in his other profession “Water quality is a huge issue. I know it’s a big thing for World Rowing who’ve put a big focus on it, but also as an individual thing, I’m a water scientist, so of course it is absolutely important to me and using products that are in line with that get a double thumbs up.”

Using Nikwax, GB Rowing Team can be assured that their kit is in safe hands, as is the current generation of potential medal winners on the Road to Rio.

What have a sleeping giant Wild Boar, a mystical standing stone and menacing hills shrouded in a swirling ethereal mist got in common? Game of Thrones perhaps? Why no! – we’re merely Waxing lyrical about features of interest that our army of walking warriors enjoyed as they braved the elements to walk, jog and even […]

The work of the European Outdoor Conservation Association

Tanya Bascombe from EOCA gives us the low-down on the great work done in the UK and overseas: As an outdoorsy type, I bet you probably consider yourself ‘Quite Interested’ in green issues and conservation?  ‘Treading Lightly’ – all that kind of thing?  Well did you know that across Europe, an ever-expanding group of outdoor […]

The latest blog from Hannah and her trusted friend, Chico: I last sent a message at the very beginning of last July’s heat wave, when the rains of June were still fresh. The walk around Wales took another four and a half months; Chico the donkey and I finally arrived back in Aberystwyth in mid-November, […]