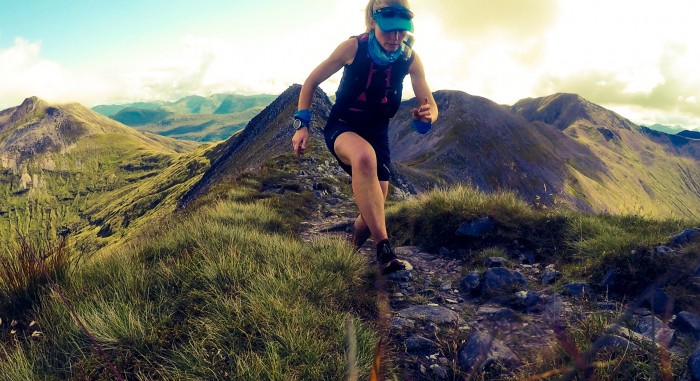 This month we interviewed ultra-runner Debbie Martin-Consani. You can read more about Debbie HERE.

How has your running schedule been this year so far? The weather hasn’t been kind to you in Scotland, have you managed to regularly get out running?

“Living in Glasgow, I don’t really have an option to allow weather to affect my training.  It is what it is.  I’m sure it makes Scottish runners that little bit more resilient.  It did, however, affect my training for last month’s Transgrancanaria.  Not the training for the 125km distance, but the 7,500metres of ascent in the race.  I don’t mind winter training but wading through knee-deep snow is fruitless.  I can make a mountain out of a mole hill, by doing reps of local 1000ft hills though.

“Where there’s a will, there’s a way. It very much confuses (and annoys) the hikers, which is often quite amusing.”

Your own Blog details your last ultra-run as the Montane Tor de Geants, one of the toughest races in the world. What could be next?!
“The best thing about ultra-running is the endless possibility.  Your self-imposed limitations change and adapt all the time.  There have been many occasions when I’ve looked at an event and thought it was too big or tough for me.  Like I viewed the West Highland Way, Spartathlon and Tor des Geants before going on to finish them.   But once I’ve completed something, I’m looking for the next big thing.

“By nature, I think most ultra-runners have addictive personalities so always pushing the boundaries.  I doubt there are many things I will do in my life that will compare to the Tor des Geants experience, but I’ll no doubt find something.  I’ve got a Bob Graham Round, UTMB and the Spine Challenger on the cards to keep me occupied.”

Your running skill is about filling time, not necessarily distance. What do you see as the future for ultra-running? Just how far and for how long do you think athletes could end up running?
“I think we’ve only scratched the surface.   Even over the last five years, the sport has come on leaps and bounds.  Every year race records are broken. It’s attracting faster runners, younger runners and professional athletes.    The demand for races means new events are starting all the time.  At the sharp end, it’s really competitive and boundaries are being pushed and times are tumbling, but one of the greatest things about the sport is its inclusiveness and camaraderie.”

Do you have a personal ultimate running or time goal?
“It’s quite simple, I want to run forever.  I don’t want to get to a point in my life where I can’t physically, mentally or emotionally run anymore.   I have a never-ending bucket list of races that I want to tick off.  Badwater, Western States, Hardrock, Cape Wrath, Comrades… the list goes on.”

How is your physical training continually developing and growing?
“I had a bit of a calf injury at the beginning of the year (my first injury in about 10 years) so I had to have an enforced running break for a few weeks.  I used the time to focus on strength and flexibility, which I’ve really got into to.  I always said I needed an injury to stop me from running.  It was really beneficial to have the time out, as I’m really feeling the difference that adopting a regular strength plan has made.  Not just sporadically doing it once a month!

“I also train in blocks specifically for races, taking into consideration the train and ascent.  Last year, I went from running a flat 24-hour race in July to training for Tor des Geants nine weeks later.  It was far from ideal, but the opportunity came up.  As Richard Branson said: “If somebody offers you an amazing opportunity but you are not sure you can do it, say yes – then learn how to do it later”.

You are incredibly open and honest on your blog about the mental challenge of running. What’s your top tip for preparing your head as well as your body?
“If you want something, you will find a way.  I don’t race very often, so I focus and prepare for each event I do.  Going into a race, I will have goals in mind but above everything I will do my very best on the day.  In ultra-events, things will always go wrong.  You’re not the only one not having the perfect day.  Whether it’s stomach issues, cramps, fatigue or having an almighty bonk, experience has taught me that I can work through everything.  Don’t shit quit, just because it’s tough.    Focus on breaking the race down, by hour or checkpoint.    You can’t control what’s going on around you, but you can control how you react to things you can’t change.  Instead of trying to be positive, get your head in a neutral place by simply concentrating on your breathing or counting to 50.”

What advice would you give to someone wanting to make the leap from “normal” running to ultra-running?
“Find a race that you really want to do and make that the main goal.  Even if it means using other races as stepping stones to get there.  For example, if running the West Highland Way is the dream, think about doing the Highland Fling or Devil on the Highlands.  Thankfully most longer races have minimum entry requirements, so you can’t jump in feet first.  It is more complex than ‘normal’ running, because it’s not simply putting one foot in the front of the other.  You need to think about kit and get used to running with a pack.  Nutrition and hydration is a personal thing and often involves some trial and error. Self-care plays a big part too, as many a run or race is ruined because of blisters, chafing or running out of gas.   Don’t get bogged down the pace and splits.  I’ve seen many marathons runners kaboom in ultras, because they think they need to keep to a certain pace.  Pace is less important.  Pacing and staying within an effort you can maintain for the duration of the race is very important.”

Your husband is a runner as well, would you advise your son to literally follow in the family footsteps?
“Does he have a choice? I would, of course, love him to be a runner.  But the most important thing for me is that he has an appreciation of the outdoors.  Kids don’t have the same freedom as the generation before, so it’s important that parents are involved in encouraging their natural sense of adventure and making exercise an enjoyable and habitual experience.  I love being out on the hills and mountains with my son.  And he enjoys the freedom it gives him.  Plus, he earns some gaming time too.  He’s called Cairn… and I don’t think the Cairn on the cairn pictures will ever get boring.”

When and where do you decide to use poles when running?
“It’s a personal thing, but for me I would only use them in mountain races or in training when there’s a lot of vertical ascent.  I wouldn’t use them on a trail run, as I like to have my arms free.”

Which poles do you favour and why?
“I have the Black Diamond Carbon Z-poles.  They’re really light and easy to use.”

Nikwax helps to protect and freshen up baselayers and exercise clothing. How do you keep your clothing fresh run after run?
“I make sure I hang up all waterproofs after use, so they’re dried and aired.  Not stuffed in a bag and found a week later.  I only wash (and very rarely) separately with Tech Wash.”

How has Montane helped and supported you? And what’s your favourite piece of Montane gear?
“Where do I start?  I’m loving the new spring/summer 2018 range, because I’m a big fan of running skirts and vests.  Montane Athletes were involved from the design process right through the testing, so it’s great that the products are athlete led and tested in the proper environments and conditions. As mentioned, we’ve had a pretty hard winter and I would have been lost without my Spine Jacket.  Nothing gets through that.  And the prism gloves are amazing.” 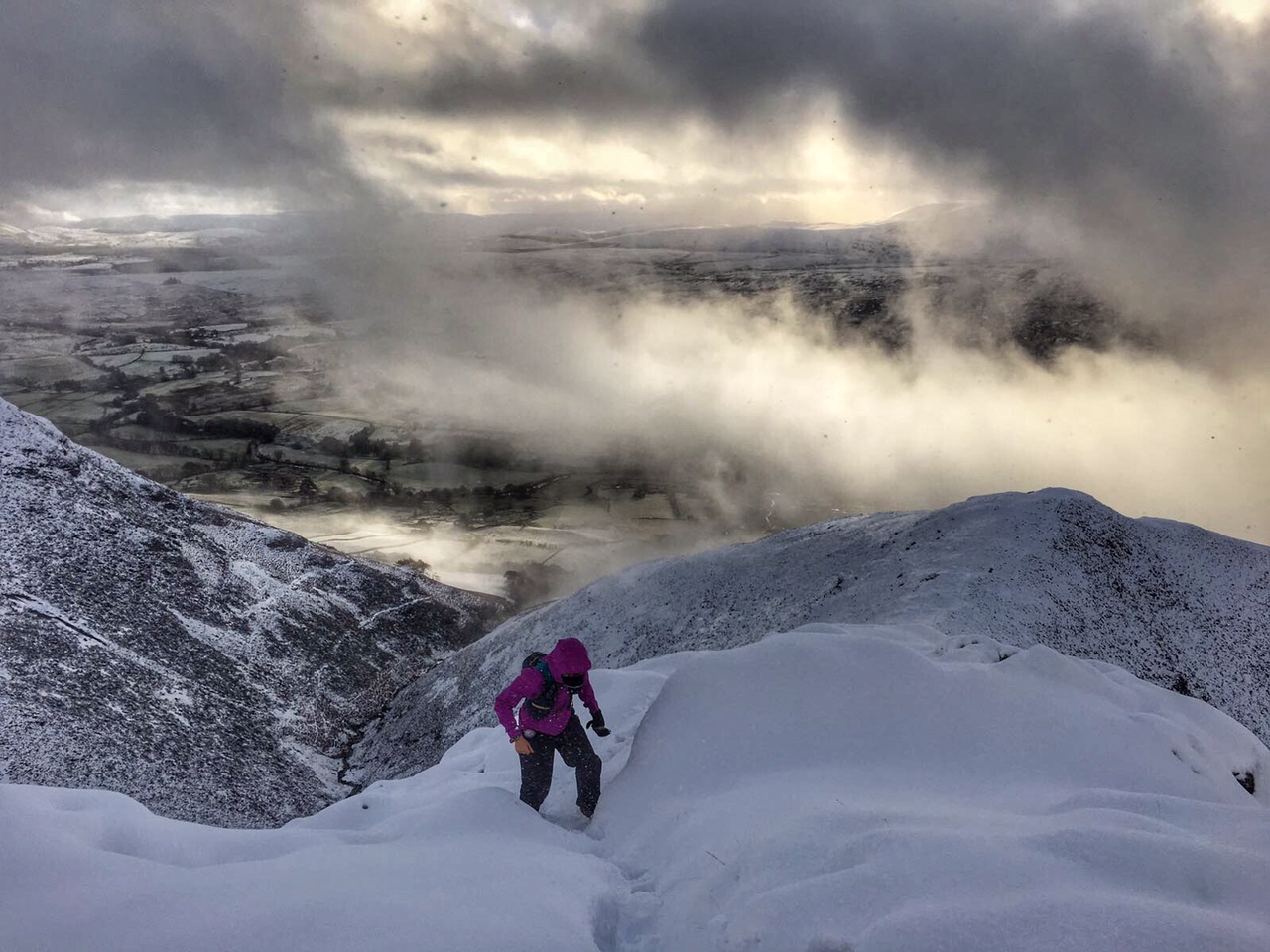 Camping With a Conscience

This summer, thousands of tents will be left for landfill as festival goers choose to discard cheap or broken camping gear rather than pack it up and take it home.  At last year’s Glastonbury Festival, more than 1,000 volunteers were drafted in to clear up the mess left behind – costing organisers around £785,000 for […]

Throw away your hibernation coat and get out for spring adventures.

Spring has officially sprung and we know that the days will slowly be getting warmer and more pleasant for us to get outside and step up our activity levels. Fancy a run? We are just weeks away from the London Marathon and many of us will be increasing training plans in order to be fit […]

Interview with Camping and Caravanning – care for your camping gear